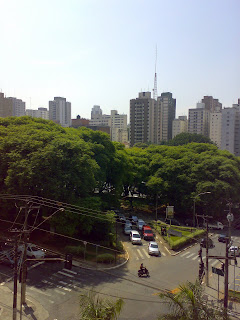 I am in Brazil!
The flight felt very long, thought I was going to miss my connection in Amsterdam when I discovered it was on the other side of the airport. About 8 hours into the flight I discovered Martin Owens, also going to the festival, was sitting across the aisle from me, and it was great to break up films and the world of JPOD (Douglas Coupland's view of life as a games developer) with chatting about the world of pervasive media. We both settled down to a language course on the inflight entertainment screen and attempted to learn portuguese. me falo pequeno portuguese. It is a lie because that is about all I can say and I am not even sure if it is right, but I am sure I will improve as the week goes on. Armed with some knowledge of Spanish and French seems to be helping.

Lorenco met us at the airport and helped us with the first moments of aclimitazing. Wierd travelling in a day, somehow it doesn't feel like you have gone anywhere because there was no night time in between, and Sao Paulo only 2 hours behind the UK so no jet lag, but I was very tired having got up at 3am. Kept on thinking about Victorian travel and how long it used to take and probably should considering the carbon I am personally guzzling through all this travel.

We were taken to the hotel which is very cool, will add a picture if I can get the bluetooth to work on my laptop. Strangely it is a Japanese hotel (Sao Paulo has the largest Japanese population outside of Japan, although I am sure San Francisco lay claim to this too). I am travelling the world and keep ending back in Japan, which is fine by me.

We decided to be adventurous and have a wander to find a restaurant, we went around a couple of blocks, the hotel is off Ave Paulista the main modern street, with the SESC gallery a few blocks down. There were Lanchonete on nearly every street corner filled with kids smoking and drinking, they are a bar, tabac (like french bars) and canteen in one. We found one that looked cleanish and busy and sat down for beers, rice and chips, beans and I had an omeleto, which came first with bacon bits - nao comer carne didn't seem to work... maybe it means I love bacon bits? but the waiter was happy and understanding enough to exchange it for a cheese omelette when I finally managed to articulate myself.

Was a nice evening with Martin, good to have someone to chat to, I was dreading the loneliness of arriving in a strange place, eating in the hotel restuarant on my own and spending the evening watching crazy brazilian Tv until I could sleep. So much more relaxing to venture out and see where I am. Missing Matt though, we have travelled together so much the last couple of years with Dragons that it feels unbalanced and not so fair that I pulled the long straw (not that I am complaining). Hope all ok back in blighty Matt!

Despite all the warnings and pessimism it doesn't feel dangerous or intimidating in the area around the hotel, not that this will make me less cautious, mind you. And it is hot. It is nearly mid summer and so nice to feel warm again, after windy, rainy London this weekend.
Better get ready for breakfast. Hope i don't get faced with wierd Japanese gluey poached eggs that still makes me nauseas thinking about it. Meeting Paulo and some of the other people who are staying at the hotel too at 1pm. They have organised a vegetarian restaurant to sponsor the festival, which is great, and it looks like there is going to be a party in the Lov.e club which i read was where quite alot of Brazil's underground drum and bass and techno scene goes on. mind you that was in the rough guide so maybe not so underground...

Have to pay for internet in the hotel, though not that much, but will check my mail and stuff morning and evening.