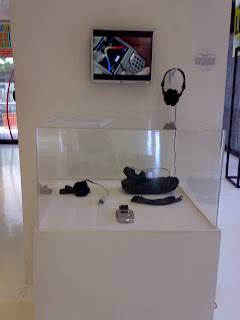 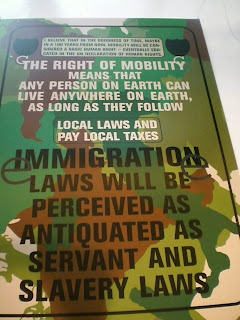 Pictures: The exhibition at SESC, one of the posters, Alborto, Martin and some of the guys from Bijari at the pizza place 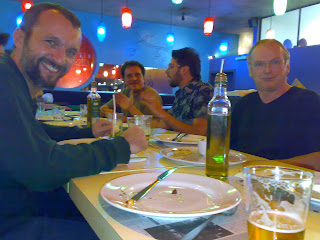 Yesterday the festival began. It is a really great festival and I am falling in love with sao paulo. I still haven't seen that much, but everyone here is totally charming and beautiful (as brazilians seem to say alot in english) and i am liking the area we are in, although it is very posh and safe, so I have not really seen sao paulo yet. It feels though that everyone is very nice to each other and look out for each other. There is someone to do everything for you, open the door, park your car. The contrast to what I know about much of brasil, the city of god, the instructions about safety... is unbelievable, but then this is the posh area. At the end of the day though everyone seems so much smilier and polite than in england.

The conference is very interesting too. yesterday was about education and the environment, some fascinating talks about $100 laptops that are being distributed to schools around the world and some specific projects using them in Sao Paulo and Porto Alegre. A TV presenter that uses television as a learning tool in brazil and then takes projects from this programme into schools in small villages in the north of brazil, Acre, where the attendance in schools have increased dramatically. A ngo that works in the amazon and also has a programme to collect mobile phone batteries. Martin is very much from the world where I work and knows alot of the same people. The audience seems to be teachers, game designers and artists from all over Brasil which is really interesting, it is so refreshing to not be in arts context but with wider discussions.

I got asked to do a 15 minute talk as part of the education theme, at the last meeting. It was a bit unplanned but people seemed really interested in our work. The woman who works with the $100 laptops said she loved the idea of what we were doing and thought it was all totally "Crazy" and great for children.

The exhibition has really good work. These great posters by designers showing all views of mobile technology, pro and cons. Spent yesterday evening drinking and eating with some of the other participants including an artist collective that do activist art and have similar approach to us and have also been going the same length of time. They cross art/commercial work in the same way we do (but with more emphasis on the commercial as there is less government money here) it is great to go across the world and meet people trying to do the same thing. Paulo and Marcelo are lovely, Marcelo took me to lunch to a Japanese restuarant that had an amazing buffet. The evening was spent in a pizza restuarant in the most glamerous part of town, drinking beer and caiprinhas.

Have come across a new technical hitch. There are major power problems in the gallery and 2 computer blew yesterday that were meant to be showing our dvd. This is causing some delays, again this morning all the power had been switched off. For once it is not the complicated technology but the simplest thing!

This morning I woke up and had a swim in the pool on the 14th floor of the hotel overlooking the view of sao paulo. What heaven! I feel very spoilt and love it here.
Posted by ai at 4:01 AM