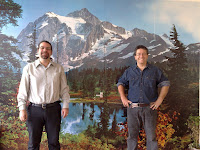 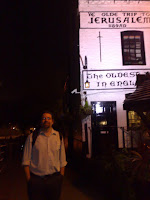 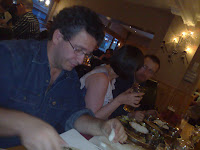 The last couple of months have been very interesting at ai.

We have been preparing for Them and Us - the work in progress, which happened last week. It was interesting but quite scary to show something at such early stages to an audience and to see how they react, engage and play with the technology. It was a good experience though, hopefully for the people who gave us their time and involvement in our early ideas. The overall response was positive and even quite excited from the majority of the players/participants/audience whatever they were! The main feedback we got was more... we need to be more full on, which is really great.

We have been in residence at the Mixed Reality Lab, at Nottingham University which has been fantastic for us. Playing with the Ubisense technology, an ultra wide band tracking system that tracks distance, proximity, height etc.. of people and objects. We are using this to develop Them and Us (which we are describing as a "mass participation wii game").

The same week we had a visit from Paulo and Marcelo from Mobilefest in Brazil, to discuss the BR163 expedition that is planned now for August 08, although we will try and fundraise to do a reccy this year, although it is very tight for time. We had lots of meetings and organised a network event at Broadway Media Centre to talk about our work, Nottingham Trent Uni and Radiator's Performance Space programme and for Paulo and Marcelo to talk about Mobilefest.

Hopefully even if we don't get to the Amazon this year we will find a way to go back to Mobilefest in the winter and continue our collaboration with them.

The other very exciting thing that is happening is that we are in discussion about a new venture, more about this soon...

We also have a new version of Heartlands which will be launched at the Mal Au Pixel festival in Paris next week... so we are off again on our travels, this time to Paris with Matt Davenport and meeting up with Capra for the final weekend to present Heartlands in the area around the Marchee Du Puce (Flea Market) and the Mains D'ouevre arts space.
Posted by ai at 2:23 AM