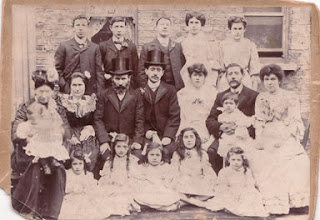 A couple of weeks ago we went down to London to start work in Woolwich and work with Woolwich Poly art department, working with Key Stage 3 and BTEC students.

One of the reasons we are excited about this project is that I have my own personal connection to Woolwich. It has always been part of my family's story that once upon a time my family lived over the river (I was brought up in North London). The myth was that my great grandfather lived in the Woolwich Arsenal and was rich enough to buy shares in the original Arsenal football team.

Some years ago, these Arsenal shares revealed themselves, my great Aunt Pearl was found to be in possesion of the shares and finally they were indeed shared out amongst my family members. Triggering family reunions (and some debate) and a growing interest for my father in the family tree.

Since then my father has followed many of his generation in their retirement years, to explore the family tree. A connection to the Grodzinskis family, who own a famous Jewish Bakery chain in London, revealed more about the family history, chased back to the days in Woolwich.

Between my Dad and his fellow investigator they discovered a large family that lived in Woolwich from 1895. The family owned a fruit and vegetable shop on Thomas Street, one of the main high streets in the centre. A beautiful old photograph we have shows a wedding party in the back yard of a Victorian building. The wedding is of my Dad's great uncle Velvel. My grandfather is probably the moving child on the left hand side, his many sisters are sitting crossed legged on the floor and my great grandparents are at the end of the second row to the right.

Our first step to begin the research involved my Father and I taking a trip to the Heritage Centre to follow up these leads. With our Arsenal shares documents, this photograph and the Census research with details of the roads, dates and where in Poland my family had come from, clasped in our hands we met with with the wonderful Francis at the Heritage Centre.

After trawling through documents, books and the small folder about the Jewish community of Woolwich we found some amazing things. Firstly, we found records of my great grandfather's tailor business. Maximillian Jacobvitch was a master tailor for the Arsenal. We think we have discovered why the family came to this small area on the edge of London rather than the East End, where the rest of the family and the majority of other Jews went to when they arrived from the East.

The small file Francis had been building up contained a gem that began to set the ball rolling... a newspaper clipping from 1905 described the first Jewish wedding to take place in Woolwich, it was the wedding from our photograph with the names of my family, describing the ceremony and party afterwards at the fruit and veg shop on Thomas Street, where the photograph was taken. The myth was beginning to come alive!

...and so begins the story.