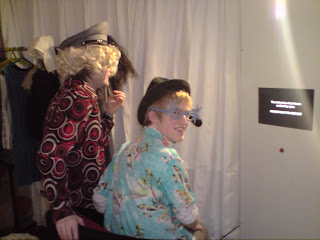 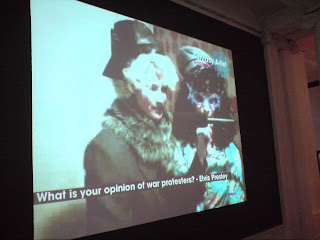 We have had a couple of very long days setting up. But it was all worth while, last night
approximately 250 people turned up for the launch at the Hatton Gallery and The Fantasy A-List Generator went down a storm. Once the wine started flowing people piled into the booth, put wigs and disguises on and got broadcasting. The only hiccup was when someone switched the microphone off (which was caught on camera).

The launch went on to several other venues, we finally made out of the gallery and to the Discovery Museum, where we happily discovered Yuko, who we had met and spent several drunken nights with in Tokyo. Neither of us knew the others were showing work at the same festival. Her work was an interesting lo-fi hi-fi installation, that reminded me of 60s gallery happenings with printers. We went on to Alt gallery with a great installation in a cool little gallery space at the back of a very cool record shop. four turntables made sound created by little remote control vans and the walls were covered in radios. (see pictures) then went on to the castle for a video/sound installation that didn't quite do it for me although it had choral music in old castle ruins which is always good.

We then were all quite worse for wear and desperate for food, missed the VIP pizza party with DJs so found our way to an amazing Japanese restaurant with Sarah, Laura and Pete and ate and ate, Matt was pleased with his beef in a box.

Today we are just tweaking things and feeling a bit hungover, more events tonight.
Watch the A-List on www.make-tv.net
Favourite moments so far are the little girl, the full band and the security gaurd who did a secret broadcast before the gallery opened this morning, although tragically it was before we discovered the mike had been switched off so know one will ever know what he said.