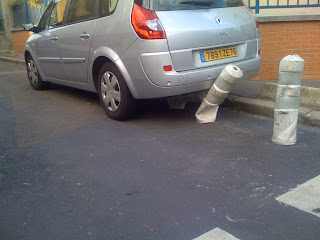 The day of aggro was upon us, after escaping the grasps of the French room inspectors, I made my way into the picturesque bustling streets of Jaures to buy the one thing I always forget... a towel! With a couple of baguettes under one arm and the inevitable cheese and sausage in the other I queued up at our local monoprix only to be held by the police as one young guy thought that shoplifting was an easy way out, au contraire think again when the local gendarm have baton power. Needless to say my man wasn't getting out of the shop and neither did we for what seemed like an age whilst I tried to engage in my best French with the old man next to me.

It was the kids workshop day down at good old Mains D'oeuvres, so after tarte de jour it was pandimonium as 50 children descended upon the gallery space. They had a game at the beginning where the object was to find clues hidden around the space. Although a treasure hunt amongst expensive equipment and technology didnt prove to be a great idea, as clues were hiding behind carefully balanced monitors!

The children loved the game as they sprinted off around the marketplace eating up territories fueled by chocolate tucked inside baguettes. I even got so immersed in the game that I managed to run off the map and ended up on a tube back to base all kitted up to the bemusement of the passengers.

An exhausting afternoon was followed by some light entertainment in the evening as we headed into town for a rendezvous avec our fellow artists. We were warned in the usual French manner that there may be a strike on the metro, but everything seemed fine apart from the slower speed that the trains moved at (maybe it was a minor dispute?) We watched Man Utd take the European cup whilst biting our nails as Rachel read intently under the vigour of the Parisian football chants.

The walk home was a long and winding route that took us back along the canal to the point ephemere where it all started for us. The aggro continued as one French guy intent on causing a rukus followed us asking all the time if we would like to engage in some man love with him. Matt seemed game for a second, but we then quickly realised he simply wanted to fight so we made a sharp exit.

After collapsing in a huddle back at the pad, we were a little rusty to start with this morning, apart from Rachel, who once again came to our rescue with petit dejeuner. We decided to head out and make like tourists this morning, so obligatory sunglasses on, we headed off to Sacre Cours for a croque monsieur and a wander. We bumped into the Moulin Rouge on the way, as I noted the word poisson rouge to add to my ever increasing and annoying random French vocab. Amongst the usual people sculpture things and souvenirs there was a guy drawing a portrait of a lady in the usual way, only to our amuse/bemusement somehow he was making her look unmistakably like Parkinson of BBC chat show fame, nice.

Due to a lack of internet cables and anyone assuming responsibility, we ploughed on with Heartlands today dipping in and out of weak wi-fi connections. But the game was fine and dragged in spectators from all nationalities over the buidling as the spray shapes unfolded.
We're heading off to see some of the festival's experimental music this evening after planning our trip to Rex Club this weekend. Mais oui mais oui 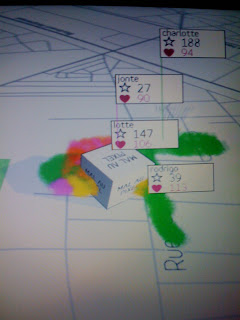 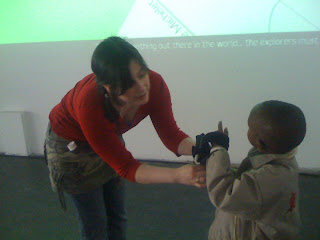 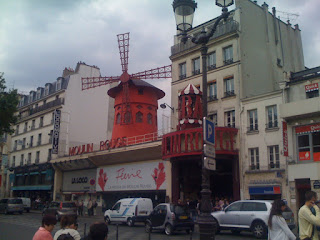