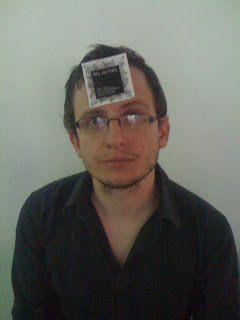 This morning we were woken up by some particularly rude french building inspectors (In fact I am writing this now because they have denied me my lie in!) 3 people barged in this morning ranting about "Salle des Bains", scaring Rachel and generally stomping round the flat as if they owned it.

Anyway yesterday we got Heartlands working properly and 8 people played the game and it was well received. We also had an interview from a French Journalist for a magazine called TelePop and apparently there was an article on us in Liberation.

We had one guy called Pierre who played and on returning to the space he looked as if he had been taken round an assault course by a drill sergeant. He was dripping sweat and claiming that we had tried to kill him! After he had calmed down we realised that he had really enjoyed it but perhaps engaged in the experience beyond the call of duty.

We had a boring early night last night. Which was probably a good thing as far as the first part of this post is concerned.
Posted by ai at 12:55 AM