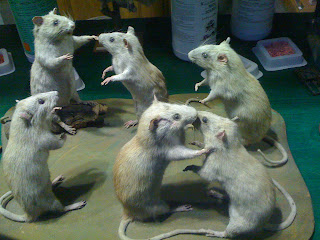 We arrived at the exhibition space at 12pm to start setting up as instructed. Unfortunately the technicians decided to arrive at about 3.30pm, and work on installation didn't really begin in earnest until about 5.30pm. So we spent a whole afternoon twiddling our thumbs and getting frustrated in an Anglo-Saxon work obsesssed sort of way.
In some ways it demonstrated stereotypical attitudes of European nations to getting things done. The Germans were in a back room quietly beavering away. The french were smoking fags looking at the problem and saying things like "we'll do that tomorrow", and the British were wandering around looking for something to do while laughing at anything which vaguely sounded like a fart. Specifically the sound in someone else's installation.

In the evening we went to the area around the Pompidou Centre and wandered aimlessly around street after street as tourists do before finally finding a reasonable restaurant near the Bear Bar (it does exactly what it says on the tin, big hairy men drinking wine on the street, arm in arm).

In our moments of vague meandering we came across a shop which look like it dated back to before the revolution with a sign declaring: "destruction des animaux nuisibles". In the window a strange tableaux of stuffed rats in embraces or fights could be seen. This rat catcher was demonstrating his abilty at catching vermin through the number he could exhibit in bizarre poses in his window. Brilliant.