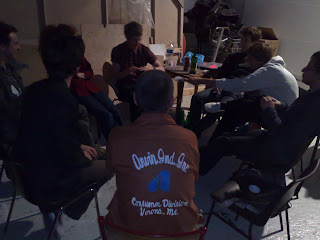 Set up finally happened in time for the launch at 7pm Monday. We weren't quite sure if the launch happened, but got a meal of big quiche with the other artists and ended up all sitting in the workshop that is a bit of a man geek pit full of toys and electronics from Sofian and Sam, and Christophe and Jonathan (Optokopter) fixing their electronic balls and playing chess, eating cakes, cold pancakes and passing round cheap wine. Met Lucy a textile artist who had also found herself drinking wine in the pit. The picture looks like a technology self help meeting. Eventually got home about 2am again.

Yesterday we attempted to get to the Mains D'ouevres early, finding our area of the gallery covered in mud and a strange mannequin that looked like it had been badly abused.

Set up got complicated by the computer we had been given not working, but finally resolved it by the skin of our teeth in time for several games to run at our alloted time. A really great second game (which was good cos the press were there to interview us) with Pierre setting the highest score at 1183, we thought we might need to call an ambulance though, he came back sweating and breathing hard, needing water...

We managed to get back to the flat for an early night-ish in bed before 2am missing the contemporary dance show in order to recuperate. Ate the best pizza ever from round the corner from Point Ephermere. Matt's french word of the day remains "aujourd'hui" despite our pleas to find a new word to say every 5 minutes. He is making us laugh constantly with his "Pahs", "Bofs" and "Pouffs" particularly when he trys them out on French people. My brain is fried by speaking french, explaining the game to the visitors and players and the long french lessons with Laura to make the voice over. Laura was very amused by trying to make me make all kinds of wierd french sounds so that people could understand what the hell the game was about. Sat in workshop making strange french faces whilst shouting oouuu and rrrrr down a microphone, think i have turned the game into comedy.

Heartlands has featured in Liberation the french newspaper. Now we are famous.