Today is going to be a busy day, Matt is off to La Cantine to present at a seminar about public space and we have an afternoon / evening of Heartlands back at the Main Egg as Matt is calling it.

The last couple of days have become a bit of a blur of French speaking, quiches and hanging out at the Egg.

I left the Matts to roam free in the Jardins de Luxembourg, more likely chasing innocent French girls, I went to try to resolve the audio issues on the french version of the sound track. Spent the afternoon in the artists atelier (geek man pit) and then set the game up, had 8 players, they went well. Met some guys who are setting up a pervasive game company and have made a heart rate mobile phone game which sounds interesting. I was interviewed for a Canadian radio station and also (in French) for the film about the festival. We have French telly coming today.

Capra came in the evening and we saw a bit of the music programmed at the festival. Electro kids swerving between glitchy sounds and 80s singing, with bowl haircuts and semi-tektonic dancing.

The artworks in the exhibition are really interesting although the layout of the space somehow doesn't do it justice. The Optokopter installation is a simple yet engaging concept of typing your name onto a screen - that amusingly emerges from a suitcase, throwing a ball against the wall and your name (or whatever word you type in) appears on the wall.

There is a really lovely, tactile installation called Akousmaflore by Scenocosme, hanging plants that sing and make sounds when you touch the leaves, it is impossible to walk past without stroking them, each plant has it's own song.

Kit Collaboration is Toby's collaborative work about viruses, he has only brought his hooded tops with virus names on them but I am intrigued to know more, and like the idea of doing an exhibition that involves hanging some hoodies on a clothes rack. No tweaking. 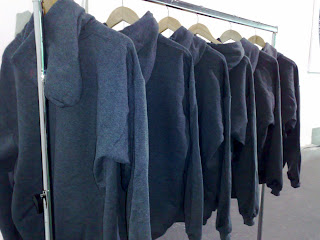 Samuel St-Aubin and Sofian Audry's sensor triggered electronic objects are like little animals waiting to come alive in corners of the Mains D'Ouevres. The most beautiful is outside on a tree, you press a red button on the trunk and the tree wakes up with birds singing and chirping. I wonder how the real birds feel when they take refuge there. The solar powered insect UFO in the gallery makes cricket noises in response to it's solar powered head. 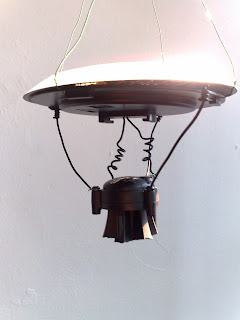 There is also an interface that determines your mental health problems and types out a prescription, i got a prescription for valium (always useful); a wearable coat with a camera on the back collar and a video screen in the arm so you can always see what is going on behind you, commentating on CCTV and surveillance. I think the French are worried they will go the way of us English, being watched constantly but no-one ever seeing. 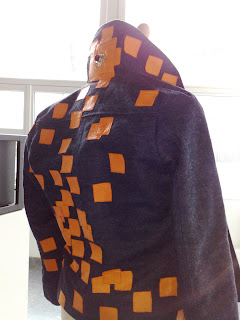