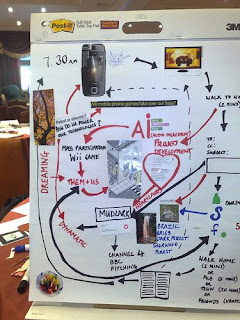 a day in my life

The day began with a beautiful breakfast and a discussion about sensors, wii remotes and Them and Us, found myself on a table with like minded people who also had an interest in live gaming.

Launched straight into an overwhelming set of presentations from the 30 people (approx) here who all consume media nonstop throughout the day, multi tasking and facebooking along with all the other widgets gadgets and geek worlds that they keep one finger in as they work - with media.
The whole thing is making me feel a bit on a tilt.

The rest of the day worked at the speed of light. Moving from one task to another, working with new people, crossing over tasks, to the point that we were walking into rooms and not knowing who we had been talking to and frankly what we were doing there. But meeting the most amazing people and learning alot about the media world.

The hotel is elegant and full of rich retired people sitting on sofas covered in expensive jewellery, it's won an award for best small hotel in the uk and has a helipad for rich people to pop in. The Duke chooses all the paintings individually for each room, with all that time on his hands, he should get a proper job. like in the media or something.

The afternoon caused a major slump with no break all day from talking and thinking of ideas with so many people. I had a bit of a majr questioning as the 30s-40s white middle class london-ness (and it takes one to know one) of it all hit me and thinking about the Equal project and attempts to widen the amount of people from different cultures and backgrounds into the industry suddenly felt like even more of an impossible task than it ever did, i feel the ideas (as with TV) reflects this. we did a map of the uk at one point where everyone had to stand in the field with the helicopter and group depending on location. the wall was hadrian's wall and so scotland wasn't even allowed. i was alone in the midlands, sole representative a few from Sheffield (seeing as it is an event as part of a sheffield festival) and one from Manchester.

the meal was a bus ride away like a school trip to the duke's restaurant. Today's risotto was butter nut squash (i am not kidding risotto for a week). had some really great chats with a documentary film maker who has worked in the amazon, and the guy from res fest and ended the evening with a gin and tonic in the bar with Mike a consultant, project manager.

No time apart from morning and late night for work catching up or keeping in contact, it is delibrate on their part but is hard work to be cut off from my world. particularly at this point when lots of things are happening at the moment and i feel like i'm missing stuff (and not getting things done) and being in such an alien environment is hard to keep my head on, not the only one feeling this i know. somehow feels different from going abroad, i think because i love the making and the doing and what i do. talking about it is much more frustrating and confusing.
Posted by ai at 11:36 PM