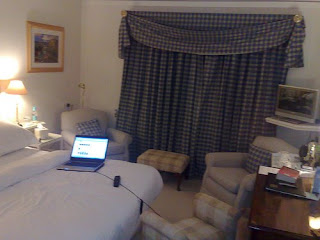 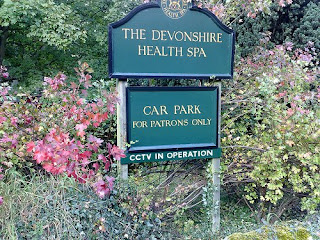 Arrived early and confused taxi driver who was waiting for some different people, finally got a taxi with one of the other participants and was driven through skipton to the hotel nestled in the moors, a 17th century hotel that is owned as part of the duke of devonshire estate, like staying in one of the big estates that my mum used to take us to on grandmother days out. have a lovely room with chintz arm chairs and a view on the moors. what wierd places this work takes me to.

thought i had ended up on a media lab with no internet but tech guy sorted us out. went down to the drinks and managed to gulp down a much needed gin and tonic before introducing myself to all the other participants, whats your name, what do you do, are you old or new media?! (TV or other stuff it seems) are you from london, etc...

was announced that after dinner we would have a task, to map our media consumption throughout the day (and therefore reveal our personalities - MAYBE?) , we had to pair up with someone who does different media stuff so i got talking to some tv, old media people as they owned up. i don't know i like to dance maybe i could be old media. but here to be new ideas person so jumped on the interactive media band wagon whilst trying to think of ways to describe what we do in one succinct commercially viable sentence, as normal. Mudlark helps and now it seems to make a very convincing story.

sat next to a fellow vegetarian (old media) and discussed the possibility of eating risotto for the rest of the week, got served risotto, then very nice chocolate mousse, raspberries and ice cream that made up for it. was advised by chef to ring other restaurants we are going to for rest of the week to ask them not to make risotto. fellow vegetarian was very nice and discussed possibility of radio show to link into amazon project, sounds good.

after food (and wine and gin oops) work began. more like play school but had to start day in the life of media tart. got quite into it in the end and partnered up with a tv woman who does documentaries. don't know how she is going to work out my day in the life, i certainly can't. will take pics but realised have forgotten adapter and my bluetooth annoyingly doesn't work on laptop, hows that for a media know it all?
Posted by ai at 2:51 PM

there is nothing better to bond over i find!