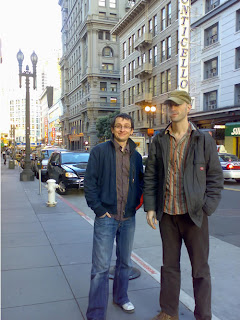 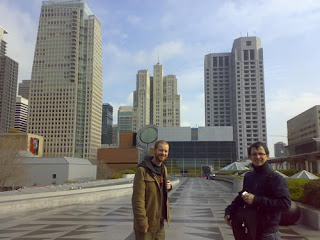 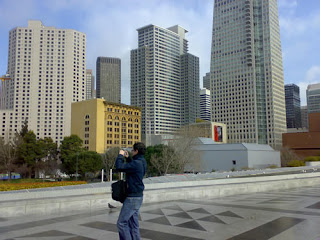 Robin and Matt outside the hotel on Ellis St, Matt and Tom at the Park where people will be playing Dragons.

We got here yesterday afternoon and meet Tom from HP at the airport. He had managed to hire the smallest car in the US (and the cars are here are so BIG) so all four of us squashed in with our equipment and bags and drove into downtown San Fran. WOW. It looks like the films... as everyone has always said about the states. So familiar, unreal and also so strange. Wierd to travel all this way and everyone still speaks English.

Lots to say about first impressions of America, I have been trying to keep my big lefty gob shut as much as possible. Then again lots of surprises, it feels like a developing country, one of the richest cities in the world yet it feels quite poor. Big buildings, big sandwiches, big bridges, big people (as expected)...

Last night we wandered around the Chinese and Italian area, had some sushi and some drinks caught up with Tom about what needs doing.

Today so far we have wandered around the area near the conference centre, Tom has taken us and sent us up at an office near the conference centre or a subsidary company of HP called Snap Fish (they do photo uploading stuff), they've been really helpful and friendly and we have tons of desk space at our disposal in a big open plan office. Matt and Robin are working there now, I am back at the hotel because the internet isn't working yet at the office. We had proper BIG bagels for lunch from a great deli with every type of food you would ever want for lunch in it. Sushi, chinese, sandwiches... mmm, i'm going to go to the hotel gym so that I don't come back looking like a big bagel.

I am off now to check out the GPS in the area where people are playing Dragons. Tom has gone off to HP headquarters (Silicon Valley!!!) to pick up the rest of the kit and sort out the T-shirts we hope are going to be made for us, and Leif and Capra (from MRL) are probably going through customs as I write.
Posted by ai at 1:30 PM