Day 2 in Japan - The Heat Closes In 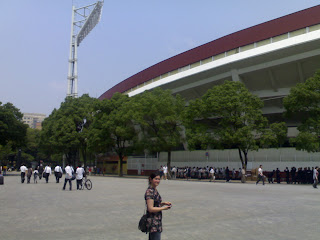 Today it just seems to get hotter and hotter. The humidity must be up above the 80% percent mark - phew!!! I woke up late nearly missing the hotel breakfast. Jet lag just wont let me out of bed.

We went off this morning to Yokohama to check if the co-ordinates for the game were correct by playing it around Yokohama Baseball stadium. It was hot, too hot to be walking around in the midday sun.

In the afternoon we went to the ICC. The japanese gallery for interactive artwork. As you can imagine there were some amazing examples of work. From lo-tech stuff like an anoechoic room (the opposite of an echo chamber). Your voice seems to die inches from your mouth. And even if you shout, it sounds like a mere whisper. Also a sculpture of a man juggling weird items which rotates in a room with a strobe light. Each portion of the sculpture is like a separate frame of an animation. The strobe light creates the zoetrope effect of making the rotating objects come alive.

To the most beautiful hi-tech work like a series of taps which when turned on water pours from them into a bowl. A projector overhead beams little images into the stream of water depending on the speed of the flow. Using a big spoon you can actually pick the digital objects out of the water. Amazing. 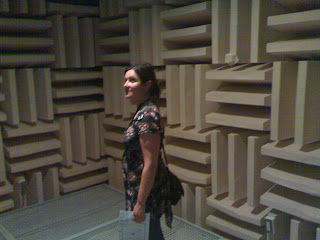 In the evening we went to shibuya to meet a Japanese friend: Keiko. There we went around some shops and she showed us her favourite shop. A cut price dept. store. Which sells everything a sort of Wilko's of everything useful and useless.

We then went and had a meal of Hokkaido style food including a jacket potato covered in pickled squid. Yum. I mean it! Lovely.
Posted by ai at 2:35 AM