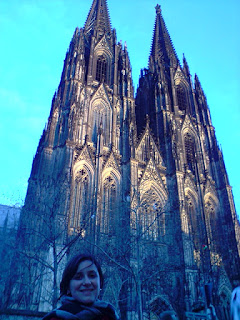 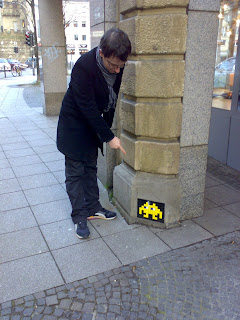 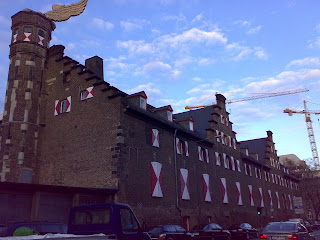 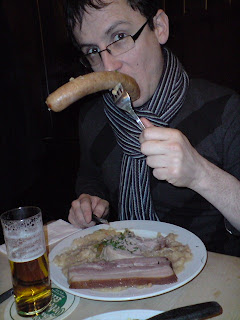 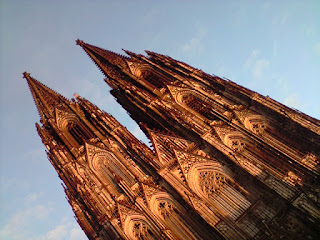 Yesterday night we got back from a brief visit to Cologne. We were invited to present our work with mobile technology and do a demonstration of Heartlands (as a single player game) to the students of the Mobile Animation Content programme at IFS (a film school).

Thursday night coincidently our Gob Squad friends happened to also be there, staying around the corner developing one of their shows so we met up at a traditional German brewery that replaced Kulch the local beer with one beer after an other until you put the beer mat over your empty glass. They were only small glasses (slightly unnerving to be drinking German beer from a glass your gran would use for a small tipple) but it all adds up and we didn't know about the beer matt rule until it was too late. The brewery served traditional German fare which involved many types of pig and large sausages for Matt, strange looking cheese and the largest gherkin I ever did see for me... to our delight!

Great to catch up with old college friends who now live in Germany and meet some of the additions to the Gob Squad and their friend Christian a genuine resident of Cologne.

We then went on to a trendy kitch bar with a statue of the Virgin Mary surrounded by a mound of spirit bottles. I forgot about the German Gin portions and accidently had a massive gin and tonic to top the night off, which didn't help my ability to do a demonstration the next day.

Heard a presentation by an expert on Pervasive Games from Fraunhofer Insititute and then Matt presented our work. After lunch I presented Heartlands in more detail and ran a couple of games with the students. A really interesting mix of people.

We had an hour to wander into Cologne, and see the Cathedral, which glowed golden as the sun went down, walked down to the Rhine, to see a new European river that we had never seen before. Matt bought some of the unnervingly small Kulsch glasses and I looked for presents for my neice-to-be but could only find art books and thought would be not suitable for a baby not yet born, plenty of time for that.

The journey home was hell. Dusseldorf airport security is the most idiotic thing I have ever seen at an airport. Then getting back from Birmingham involved a long time in the pub waiting and a very long journey for a not so long distance...
Posted by ai at 7:56 AM